Published: Mar 28, 2020
Keyfacts
No key facts added for this post

The Civil Society House Foundation project dates back to July 2013, when at a regional meeting of the Rockefeller Brothers Fund, Mr. Haki Abazi, Director of the Investment Portfolio in the Western Balkans, unveiled the idea of ​​the ”Civil Society House” project in front of the foundations of the Western Balkans, respectively FIQ from Kosovo, FAKT from Montenegro, TRAG foundation from Serbia. The donor initiative was introduced, proposing the need to establish a Civil Society House in three countries (Kosovo, Montenegro and Serbia). Rockefeller Brothers Fund as a donor in each of the three states has selected project-based organizations based on the criterion of reputation, credibility in the civil society community, professional and direct relationship with citizens and various formal and informal groups in countries. respectively as well as administrative and logistical capacities to carry out major projects. In Kosovo, FIQ has been selected by the donor as the appropriate institution that has met the criteria set by the donor to achieve and meet the objectives of the same. Thus, all agreements from 2013, when this project was initiated, were signed with FIQ, respectively when the basic condition of the donor is met only by FIQ.

The main objective of the project “Civil Society House” is to serve as a hub-center for strengthening and promoting cooperation between community-based organizations, research organizations, institutes, investigative media, legal and analytical researchers, which best contribute implementation of the “triangle approach” strategy.

Currently, the project is in the final stages of completing the design of the offices for which FIQ has engaged a design studio. The real predictions are that the “House of Civil Society” will be completed by the end of 2020. 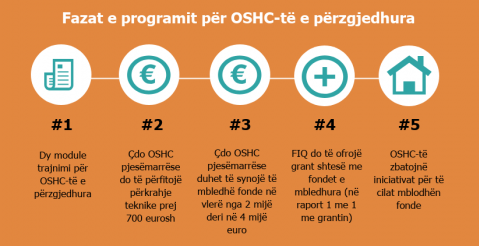 Forum for Civic Initiatives together with LINK Campus University, financed by the European Community...

The main objective of the project “Civil Society House” is to serve as a hub-center for strength...